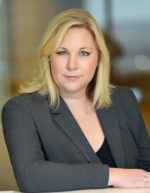 Greenberg Gross LLP is pleased to announce that Los Angeles Administrative Partner Sarah Kelly-Kilgore has been selected to Benchmark Litigation’s 40 & Under Hot List 2021, a prominent guide to the nation’s most notable up-and-coming litigators.  A former water polo All-American, Kilgore was singled out because of her outstanding record of success as a litigator and trial lawyer.  Recently, Kilgore co-chaired a Greenberg Gross team that won a jury verdict against rideshare giant Uber Technologies in a trade secrets case, and she led the representation of a former equity shareholder of an AmLaw 100 law firm in a high-profile gender discrimination lawsuit against the firm and its senior management, described by the Daily Journal as “groundbreaking.”  Earlier this year, Kilgore won a significant arbitration award on behalf of Darigold, Inc., having served as lead counsel in a breach-of-contract action.  Kilgore was named to Daily Journal’s Top 40 under 40 list 2019 and the Los Angeles Business Journal’s Top Women Lawyers 2020.

The rankings can be viewed online at www.benchmarklitigation.com