Lessons from a $50 Million Counterpunch 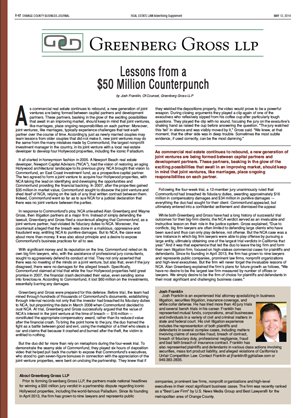 As commercial real estate continues to rebound, a new generation of joint ventures are being formed between capital partners and development partners. These partners, basking in the glow of the exciting possibilities that await in an improving market, should keep in mind that joint ventures, like marriages, place ongoing responsibilities on each partner. Moreover, joint ventures, like marriages, typically experience challenges that test each partner over the course of time. Accordingly, just as newly married couples may learn lessons from older couples that did not make it, new joint ventures may do the same from the many mistakes made by Commonfund, the largest nonprofit investment manager in the country, in its joint venture with a local real estate developer to develop four Hollywood properties, including the iconic Palladium.

It all started in honeymoon fashion in 2005. A Newport Beach real estate developer, Newport Capital Advisors (“NCA”), had the vision of restoring an aging Hollywood architectural landscape to its previous glory. NCA brought that vision to Commonfund, an East Coast investment fund, as a prospective capital partner. The two agreed to form a joint venture to acquire four Hollywood properties, with NCA taking the lead on identifying and developing the opportunities and Commonfund providing the financial backing. In 2007, after the properties gained $35 million in market value, Commonfund sought to disavow the joint venture and shed itself of NCA, relying on the lack of any final written contract between them. Indeed, Commonfund went so far as to sue NCA for a judicial declaration that there was no joint venture between the parties.

In response to Commonfund’s ploy, NCA unleashed Alan Greenberg and Wayne Gross, then litigation partners at a major firm. Instead of simply defending the lawsuit, Greenberg and Gross filed a countersuit alleging that Commonfund, as a joint venture partner, had violated its fiduciary duties to NCA. Moreover, the countersuit alleged that the breach was done in a malicious, oppressive and fraudulent way, entitling NCA to punitive damages. But to NCA, the case was about more than money. It was also about principle and a desire to expose Commonfund’s business practices for all to see.

With significant money and its reputation on the line, Commonfund relied on its own big firm lawyers, who, with the assistance of professional jury consultants, sought to aggressively defend its conduct at trial. They not only asserted that there was no meeting of the minds on a joint venture, but also that, even if the jury disagreed, there were no damages for the alleged breach. Specifically, Commonfund claimed at trial that while the four Hollywood properties held great promise in 2007, the financial crash decimated their value, even sending some into foreclosure. According to Commonfund, it lost $60 million on the investments, essentially barring any damages.

Greenberg and Gross were prepared for this defense. Before trial, the team had mined through hundreds of thousands of Commonfund’s documents, establishing through internal records not only that the investor had breached its fiduciary duties to NCA, but pinpointing the date in March 2008 when Commonfund decided to oust NCA. At trial, Greenberg and Gross successfully argued that the value of NCA’s interest in the joint venture at the time of breach — $16 million — constituted the appropriate compensatory award, rather than its reduced value after the financial crash. To bring the point home to the jury, the duo framed the fight as a battle between good and evil, using the metaphor of a thief who steals a car and claims that because it crashed and burned after the theft, the victim is entitled to nothing.

But the duo did far more than rely on metaphors during the four-week trial. To demonstrate the seamy side of Commonfund, they played six hours of deposition video that helped pull back the curtain to expose that Commonfund’s executives, who stood to gain seven-figure bonuses in connection with the appreciation of the joint venture properties, were bent on undoing the partnership. They knew that if they wielded the depositions properly, the video would prove to be a powerful weapon. During closing arguments they played a clip again of one of the executives who reflexively sipped from his coffee cup after particularly tough questions. They played the clip with no sound, focusing the jury on the executive’s shaking hand as raised the cup before answering the question. “The jury watched this ‘tell’ in silence and was visibly moved by it,” Gross said. “We knew, at that moment, that the other side was in deep trouble. Sometimes the most subtle evidence, if used correctly, can be the most damning.”

Following the four-week trial, a 12-member jury unanimously ruled that Commonfund had breached its fiduciary duties, awarding approximately $16 million in compensatory damages and $34 million in punitive damages — everything the duo had sought for their client. Commonfund appealed, but ultimately entered into a confidential settlement and dismissed the appeal.

While both Greenberg and Gross have had a long history of successful trial outcomes for their big-firm clients, the NCA verdict served as an invaluable and instructive lesson on their role in the justice system. Gross explained, “Due to conflicts, big firm lawyers are often limited to defending large clients who have been sued and thus can only play defense, not offense. But the NCA case was a rare instance in which big firm lawyers were able to play offense by pursuing a large entity, ultimately obtaining one of the largest trial verdicts in California that year.” And it was that experience that led the duo to leave the big firm and form their own litigation firm, focused on high-stakes commercial cases for plaintiffs and defendants. Since its founding in April 2013, the firm has grown to nine lawyers and represents public companies, prominent law firms, nonprofit organizations and high-level executives. But the firm will never forget the invaluable lessons of NCA. Alan Greenberg explained the firm’s plans for future growth as follows, “We have no desire to be the largest law firm measured by number of offices or lawyers. We simply desire to be the firm of choice for plaintiffs and defendants in their most significant and challenging business cases.”