How They Won It – Greenberg’s $50M Counterpunch 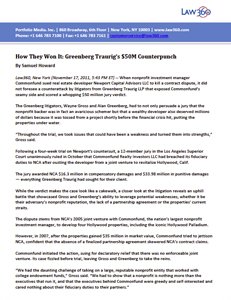 Wayne Gross and Alan Greenberg were featured in a Law360 article chronicling the uphill battle they faced in a contract dispute with a nonprofit investment manager that resulted in a $50 Million win for their client.

The Greenberg litigators, Wayne Gross and Alan Greenberg, had to not only persuade a jury that the nonprofit backer was in fact an avaricious schemer but that a wealthy developer also deserved millions of dollars because it was tossed from a project shortly before the financial crisis hit, putting the properties under water.

“Throughout the trial, we took issues that could have been a weakness and turned them into strengths,” Gross said.

While the verdict makes the case look like a cakewalk, a closer look at the litigation reveals an uphill battle that showcased Gross and Greenberg’s ability to leverage potential weaknesses, whether it be their adversary’s nonprofit reputation, the lack of a partnership agreement or the properties’ current straits.