Request a Consultation
Posted on July 1, 2013 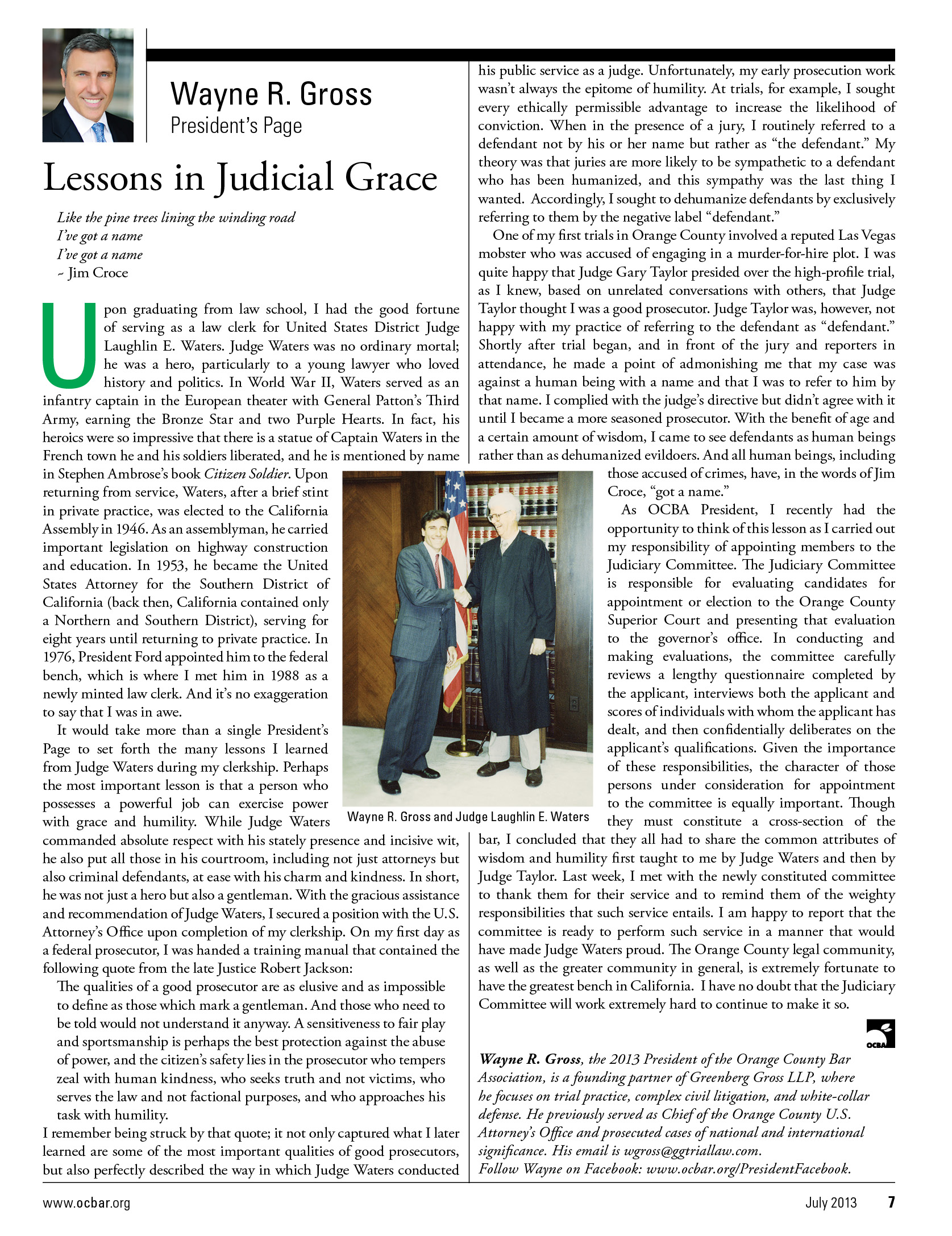 by Wayne R. Gross
Like the pine trees lining the winding road
I’ve got a name
I’ve got a name
~ Jim Croce
Upon graduating from law school, I had the good fortune of serving as a law clerk for United States District Judge Laughlin E. Waters. Judge Waters was no ordinary mortal; he was a hero, particularly to a young lawyer who loved history and politics. In World War II, Waters served as an infantry captain in the European theater with General Patton’s Third Army, earning the Bronze Star and two Purple Hearts. In fact, his heroics were so impressive that there is a statue of Captain Waters in the French town he and his soldiers liberated, and he is mentioned by name in Stephen Ambrose’s book Citizen Soldier. Upon returning from service, Waters, after a brief stint in private practice, was elected to the California Assembly in 1946. As an assemblyman, he carried important legislation on highway construction and education. In 1953, he became the United States Attorney for the Southern District of California (back then, California contained only a Northern and Southern District), serving for eight years until returning to private practice. In 1976, President Ford appointed him to the federal bench, which is where I met him in 1988 as a newly minted law clerk. And it’s no exaggeration to say that I was in awe.
It would take more than a single President’s Page to set forth the many lessons I learned from Judge Waters during my clerkship. Perhaps the most important lesson is that a person who possesses a powerful job can exercise power with grace and humility. While Judge Waters commanded absolute respect with his stately presence and incisive wit, he also put all those in his courtroom, including not just attorneys but also criminal defendants, at ease with his charm and kindness. In short, he was not just a hero but also a gentleman. With the gracious assistance and recommendation of Judge Waters, I secured a position with the U.S. Attorney’s Office upon completion of my clerkship. On my first day as a federal prosecutor, I was handed a training manual that contained the following quote from the late Justice Robert Jackson:

The qualities of a good prosecutor are as elusive and as impossible to define as those which mark a gentleman. And those who need to be told would not understand it anyway. A sensitiveness to fair play and sportsmanship is perhaps the best protection against the abuse of power, and the citizen’s safety lies in the prosecutor who tempers zeal with human kindness, who seeks truth and not victims, who serves the law and not factional purposes, and who approaches his task with humility.

I remember being struck by that quote; it not only captured what I later learned are some of the most important qualities of good prosecutors, but also perfectly described the way in which Judge Waters conducted his public service as a judge. Unfortunately, my early prosecution work wasn’t always the epitome of humility. At trials, for example, I sought every ethically permissible advantage to increase the likelihood of conviction. When in the presence of a jury, I routinely referred to a defendant not by his or her name but rather as “the defendant.” My theory was that juries are more likely to be sympathetic to a defendant who has been humanized, and this sympathy was the last thing I wanted. Accordingly, I sought to dehumanize defendants by exclusively referring to them by the negative label “defendant.”
One of my first trials in Orange County involved a reputed Las Vegas mobster who was accused of engaging in a murder-for-hire plot. I was quite happy that Judge Gary Taylor presided over the high-profile trial, as I knew, based on unrelated conversations with others, that Judge Taylor thought I was a good prosecutor. Judge Taylor was, however, not happy with my practice of referring to the defendant as “defendant.” Shortly after trial began, and in front of the jury and reporters in attendance, he made a point of admonishing me that my case was against a human being with a name and that I was to refer to him by that name. I complied with the judge’s directive but didn’t agree with it until I became a more seasoned prosecutor. With the benefit of age and a certain amount of wisdom, I came to see defendants as human beings rather than as dehumanized evildoers. And all human beings, including those accused of crimes, have, in the words of Jim Croce, “got a name.”
As OCBA President, I recently had the opportunity to think of this lesson as I carried out my responsibility of appointing members to the Judiciary Committee. The Judiciary Committee is responsible for evaluating candidates for appointment or election to the Orange County Superior Court and presenting that evaluation to the governor’s office. In conducting and making evaluations, the committee carefully reviews a lengthy questionnaire completed by the applicant, interviews both the applicant and scores of individuals with whom the applicant has dealt, and then confidentially deliberates on the applicant’s qualifications. Given the importance of these responsibilities, the character of those persons under consideration for appointment to the committee is equally important. Though they must constitute a cross-section of the bar, I concluded that they all had to share the common attributes of wisdom and humility first taught to me by Judge Waters and then by Judge Taylor. Last week, I met with the newly constituted committee to thank them for their service and to remind them of the weighty responsibilities that such service entails. I am happy to report that the committee is ready to perform such service in a manner that would have made Judge Waters proud. The Orange County legal community, as well as the greater community in general, is extremely fortunate to have the greatest bench in California. I have no doubt that the Judiciary Committee will work extremely hard to continue to make it so.
Download the full OC Lawyer Article (PDF)