Request a Consultation
Posted on October 1, 2013 By Wayne R. Gross 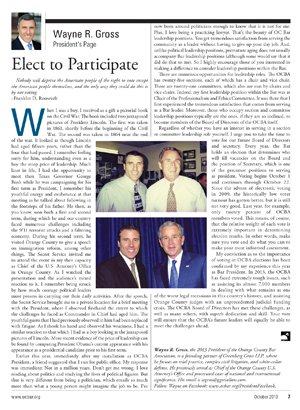 by Wayne R. Gross
Nobody will deprive the American people of the right to vote except the American people themselves, and the only way they could do this is by not voting.
—Franklin D. Roosevelt
When I was a boy, I received as a gift a pictorial book on the Civil War. The book included two juxtaposed pictures of President Lincoln. The first was taken in 1861, shortly before the beginning of the Civil War. The second was taken in 1864 near the end of the war. It looked as though Lincoln had aged fifteen years, rather than the four that had passed. I remember feeling sorry for him, understanding even as a boy the steep price of leadership. Much later in life, I had the opportunity to meet then Texas Governor George Bush while he was campaigning for his first term as President. I remember his youthful energy and exuberance at that meeting as he talked about following in the footsteps of his father. He then, as you know, won both a first and second term, during which he and our country faced numerous challenges including the 9/11 terrorist attacks and a faltering economy. During his second term, he visited Orange County to give a speech on immigration reform, among other things. The Secret Service invited me to attend the event in my then capacity as Chief of the U.S. Attorney’s Office in Orange County. As I watched the presentation and the audience’s mixed reaction to it, I remember being struck by how much courage political leaders must possess in carrying out their daily activities. After the speech, the Secret Service brought me to a private location for a brief meeting with the President, where I observed firsthand the extent to which the challenges he faced as Commander in Chief had aged him. The youthful gusto that I had previously observed in him had been replaced with fatigue. As I shook his hand and observed his weariness, I had a similar reaction to that which I had as a boy looking at the juxtaposed pictures of Lincoln. More recent evidence of the price of leadership can be found by comparing President Obama’s current appearance with his appearance as a presidential candidate prior to his first term.
Earlier this year, immediately after my installation as OCBA President, a friend suggested that I run for public office. My response was immediate: Not in a million years. Don’t get me wrong. I love reading about politics and studying the lives of political figures. But that is very different from being a politician, which entails so much more than what a young person might imagine the job to be. I’ve now been around politicians enough to know that it is not for me. Plus, I love being a practicing lawyer. That’s the beauty of OC Bar leadership positions. You get tremendous satisfaction from serving the community as a leader without having to give up your day job. And, unlike political leadership positions, premature aging does not usually accompany Bar leadership positions (although some would say that it did do that to me). So I highly encourage those of you interested in making a difference to consider leadership positions within the Bar.
There are numerous opportunities for leadership roles. The OCBA has twenty-five sections, each of which has a chair and vice chair. There are twenty-one committees, which also are run by chairs and vice chairs. Indeed, my first leadership position within the Bar was as Chair of the Professionalism and Ethics Committee. It was there that I first experienced the tremendous satisfaction that comes from serving as a Bar leader. Moreover, those who occupy section and committee leadership positions typically are the ones, if they are so inclined, to become members of the Board of Directors of the OCBA itself.
Regardless of whether you have an interest in serving in a section or committee leadership role yourself, I urge you to take the time to vote for our future Board of Directors and secretary. Every year, the Bar holds an election that determines who will fill vacancies on the Board and the position of Secretary, which is one of the precursor positions to serving as president. Voting begins October 1 and continues through October 22. Since the advent of electronic voting in 2009, the historically low voter turnout has gotten better, but it is still not very good. Last year, for example, only twenty percent of OCBA members voted. This means, of course, that the relative weight of each vote is extremely important in determining election results. In other words, make sure you vote and do what you can to make your most informed assessment.
My conviction as to the importance of voting in OCBA elections has been confirmed by my experience this year as Bar President. In 2013, the OCBA has faced extremely tough issues, such as assisting its almost 7,000 members in dealing with what remains as one of the worst legal recessions in this country’s history, and assisting Orange County judges with an unprecedented judicial funding crisis. The OCBA Board of Directors has met these challenges, as well as many others, with superb dedication and skill. Your vote will ensure that the OCBA’s future leaders will equally be able to meet the challenges ahead.
Download the full OC Lawyer Article (PDF)