The Privilege of Service Continues 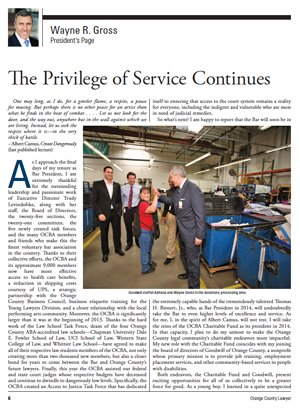 One may long, as I do, for a gentler flame, a respite, a pause for musing. But perhaps there is no other peace for an artist than what he finds in the heat of combat. … Let us not look for the door, and the way out, anywhere but in the wall against which we are living. Instead, let us seek the respite where it is—in the very thick of battle.
—Albert Camus, Create Dangerously (last published lecture)

As I approach the final days of my tenure as Bar President, I am extremely thankful for the outstanding leadership and passionate work of Executive Director Trudy Levindofske, along with her staff, the Board of Directors, the twenty-five sections, the twenty-one committees, the five newly created task forces, and the many OCBA members and friends who make this the finest voluntary bar association in the country. Thanks to their collective efforts, the OCBA and its approximate 9,000 members now have more effective access to health care benefits, a reduction in shipping costs courtesy of UPS, a strategic partnership with the Orange County Business Council, business etiquette training for the Young Lawyers Division, and a closer relationship with the local performing arts community. Moreover, the OCBA is significantly larger than it was at the beginning of 2013. Thanks to the hard work of the Law School Task Force, deans of the four Orange County ABA-accredited law schools—Chapman University Dale E. Fowler School of Law, UCI School of Law, Western State College of Law, and Whittier Law School—have agreed to make all of their respective law students members of the OCBA, not only creating more than two thousand new members, but also a closer bond for years to come between the Bar and Orange County’s future lawyers. Finally, this year the OCBA assisted our federal and state court judges whose respective budgets have decreased and continue to dwindle to dangerously low levels. Specifically, the OCBA created an Access to Justice Task Force that has dedicated itself to ensuring that access to the court system remains a reality for everyone, including the indigent and vulnerable who are most in need of judicial remedies.

So what’s next? I am happy to report that the Bar will soon be in the extremely capable hands of the tremendously talented Thomas H. Bienert, Jr., who, as Bar President in 2014, will undoubtedly take the Bar to even higher levels of excellence and service. As for me, I, in the spirit of Albert Camus, will not rest. I will take the reins of the OCBA Charitable Fund as its president in 2014. In that capacity, I plan to do my utmost to make the Orange County legal community’s charitable endeavors more impactful. My new role with the Charitable Fund coincides with my joining the Board of Directors of Goodwill of Orange County, a nonprofit whose primary mission is to provide job training, employment placement services, and other community-based services to people with disabilities.

Both endeavors, the Charitable Fund and Goodwill, present exciting opportunities for all of us collectively to be a greater force for good. As a young boy, I learned in a quite unexpected way that we should take advantage of such opportunities. While in grade school, I primarily spent my summers writing dreaded book reports for my father, a high-school English teacher whose tough love necessitated that I complete daily writing assignments. My respite, upon completing such assignments, was going to a local community center in my tough neighborhood to play sports. The community center had the only indoor gym in town, which meant that it attracted not only kids my age but also adults, many hardened by their existence in that same neighborhood. One day, a young boy with severe cognitive and physical disabilities walked into the center with great difficulty. I had never before been in the presence of a person with disabilities, and watching him make his way through that environment of seemingly wayward adults caused a powerful sense of injustice to well up inside me. It was as if the unfairness of the world revealed itself in those few unexpected moments. Overcome with emotion, I left the gym struggling to understand why a boy with disabilities had to live in such a neighborhood.

Although I never saw that boy again, that early experience stayed with me. Over the years, I gave much thought to how disabilities affect both those who possess them and society in general. Last year, prior to commencing my bar presidency, I had the opportunity to meet Auti Angel, a fantastic actress in Push Girls, a reality television series on the Sundance Channel. Push Girls chronicles the lives of four women, including Auti, who have been paralyzed by illness or accident, and reveals their day-to-day challenges and triumphs. I found Auti’s life to be particularly inspiring. She overcame growing up in a tough neighborhood to become a successful professional dancer who, in 1992, performed with LL Cool J at the Grammys in New York City. Upon returning home to Los Angeles, a car clipped hers on the 101 Freeway, causing a horrible accident and resulting in paraplegia. By the time I met Auti in 2012, twenty years after her accident, she was not only a television star on Push Girls, now in its second season, but also had a supporting role in the 2011 film Musical Chairs. She also, as reflected in her series, leads a dance team called Colours ‘N’ Motion and heads the Save a Soul Foundation. In short, Auti leads an incredible life. She did not allow the neighborhood in which she was raised, paraplegia, or anything else to define her.

My observations of what Auti has accomplished, as well as that which has been accomplished by the OCBA, have led me to conclude that there is no limit to what organizations and the individuals who comprise them can do. As a boy, I cried tears of sorrow after observing for the first time a boy with disabilities making his way through a tough community center. What I didn’t understand is that this boy’s journey to that gym, like Auti’s life journey, was not limited by what an outside observer might think was appropriate for a person with disabilities. There are no limits. Indeed, Goodwill, a network of 165 independent, community-based organizations around the world, including Orange County, is a perfect example of such unlimited potential. What started in 1902 as a single small operation in a poor part of Boston now provides millions of persons with disabilities, including veterans, with jobs and job training each year. Goodwill’s philosophy, from the very beginning, has been that the best way “to relieve the temporary distresses” of persons with disabilities is to provide “not charity, but a chance.” Put another way, Goodwill believes that it is far better to give a person with disabilities “[n]ot a coin in his hat, but a tool in his hand.” I recently toured Goodwill’s Santa Ana facilities and met several employees with disabilities who perform their jobs with passion and excellence. They perform important services—certified document shredding, custodial services, e-waste solutions, and packaging and assembly—for numerous companies, government agencies, and businesses, including law firms.

I am convinced that OCBA members will greatly benefit from receiving such services. Accordingly, the OCBA and Goodwill of Orange County have entered into a strategic relationship such that OCBA members, for the first time, will receive these services at discounted prices. But the OCBA’s relationship with Goodwill is not simply about dollars and cents. As you know, the OCBA’s mission is to enhance the system of justice by supporting the lawyers who serve it and assisting the community served by it. In other words, the OCBA is here not just to assist Orange County lawyers, but also the community. The strategic relationship between the OCBA and Goodwill will do both.

As for my future role as president of the Charitable Fund, I promise that 2014 will bring expanded charitable opportunities to the thousands of Orange County lawyers who give so much time, energy, and financial support to charity. I very much look forward to serving you in that capacity. In the meantime, I thank you for the privilege of serving you in this capacity.