Our Code of Honor

Request a Consultation
Posted on November 1, 2013 By Wayne R. Gross 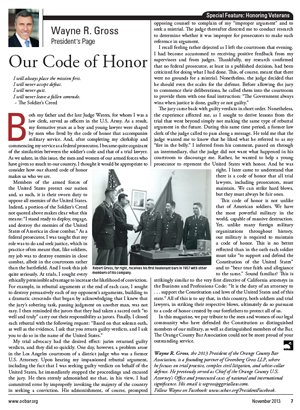 by Wayne R. Gross
I will always place the mission first.
I will never accept defeat.
I will never quit.
I will never leave a fallen comrade.
—The Soldier’s Creed
Both my father and the late Judge Waters, for whom I was a law clerk, served as officers in the U.S. Army. As a result, my formative years as a boy and young lawyer were shaped by men who lived by the code of honor that accompanies military service. And, after completing my clerkship and commencing my service as a federal prosecutor, I became quite cognizant of the similarities between the soldier’s code and that of a trial lawyer. As we salute, in this issue, the men and women of our armed forces who have given so much to our country, I thought it would be appropriate to consider how our shared code of honor makes us who we are.
Members of the armed forces of the United States protect our nation and, as such, it is their sworn duty to oppose all enemies of the United States. Indeed, a portion of the Soldier’s Creed not quoted above makes clear what this means: “I stand ready to deploy, engage, and destroy the enemies of the United States of America in close combat.” As a federal prosecutor, I was taught that my role was to do and seek justice, which in practice often meant that, like soldiers, my job was to destroy enemies in close combat, albeit in the courtroom rather than the battlefield. And I took this job quite seriously. At trials, I sought every ethically permissible advantage to increase the likelihood of conviction. For example, in rebuttal arguments at the end of each case, I sought to destroy persuasively each of my opponent’s arguments, building to a dramatic crescendo that began by acknowledging that I knew that the jury’s sobering task, passing judgment on another man, was not easy. I then reminded the jurors that they had taken a sacred oath “to well and truly” carry out their responsibility as jurors. Finally, I closed each rebuttal with the following request: “Based on that solemn oath, as well as the evidence, I ask that you return guilty verdicts, and I ask you to do so in the name of the United States.”
My trial advocacy had the desired effect: juries returned guilty verdicts, and they did so quickly. One day, however, a problem arose in the Los Angeles courtroom of a district judge who was a former U.S. Attorney. Upon hearing my impassioned rebuttal argument, including the fact that I was seeking guilty verdicts on behalf of the United States, he immediately stopped the proceedings and excused the jury. He then sternly admonished me that, in his view, I had committed error by improperly invoking the majesty of the country in seeking a conviction. His admonishment, of course, prompted opposing counsel to complain of my “improper argument” and to seek a mistrial. The judge thereafter directed me to conduct research to determine whether it was improper for prosecutors to make such reference in argument.
I recall feeling rather dejected as I left the courtroom that evening. I had become accustomed to receiving positive feedback from my supervisors and from judges. Thankfully, my research confirmed that no federal prosecutor, at least in a published decision, had been criticized for doing what I had done. This, of course, meant that there were no grounds for a mistrial. Nonetheless, the judge decided that he should even the scales for the defense. Before allowing the jury to commence their deliberations, he called them into the courtroom to provide them with one final instruction: “The Government always wins when justice is done, guilty or not guilty.”
The jury came back with guilty verdicts in short order. Nonetheless, the experience affected me, as I sought to derive lessons from the trial that went beyond simply not making the same type of rebuttal argument in the future. During this same time period, a former law clerk of the judge called to pass along a message. He told me that the judge wanted me to know that he liked what he referred to as my “fire in the belly.” I inferred from his comment, passed on through an intermediary, that the judge did not want what happened in his courtroom to discourage me. Rather, he wanted to help a young prosecutor to represent the United States with honor. And he was right. I later came to understand that there is a code of honor that all trial lawyers, including prosecutors, must maintain. We can strike hard blows, but they must always be fair ones.
This code of honor is not unlike that of American soldiers. We have the most powerful military in the world, capable of massive destruction. Yet, unlike many foreign military organizations throughout history, our military is required to maintain a code of honor. This is no better reflected than in the oath each soldier must take “to support and defend the Constitution of the United States” and to “bear true faith and allegiance to the same.” Sound familiar? This is strikingly similar to the very first directive of California attorneys in the Business and Professions Code: “It is the duty of an attorney to … support the Constitution and laws of the United States and of this state.” All of this is to say that, in this country, both soldiers and trial lawyers, in striking their respective blows, ultimately do so pursuant to a code of honor created by our forefathers to protect all of us.
In this magazine, we pay tribute to the men and women of our legal community who have defended the Constitution as distinguished members of our military, as well as distinguished members of the Bar. The Orange County Bar Association could not be more proud of your outstanding service.