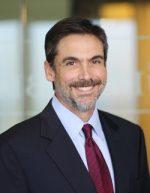 COSTA MESA, Calif. (Aug. 18, 2016) – Evan C. Borges, a partner at trial law boutique Greenberg Gross LLP, has been named the Best Lawyers 2017 “Lawyer of the Year” in Orange County for bankruptcy litigation.
Best Lawyers uses a peer-review process to gauge the consensus of leading lawyers about the abilities of their colleagues in the same geographical and legal practice area. The “Lawyer of the Year” designation is a special honor, accorded to only one lawyer per region in each practice area.
With three decades of experience handling complex business matters, Borges has served as lead trial and litigation counsel in state and federal courts across the United States. A former partner in charge of litigation at a boutique bankruptcy firm, he spent 15 years at Irell & Manella before joining Greenberg Gross in 2015.
Since joining Greenberg Gross, Borges has been retained in high-profile matters involving the intersection of bankruptcy law, crisis management, consumer class actions, director and officer liability, and governmental regulatory and enforcement proceedings. Borges’s experience in such matters dates to his role as lead litigation counsel in the massive bankruptcy case of subprime lender First Alliance, which involved a multiplicity of claims brought by six state attorneys general, the Federal Trade Commission, and numerous private attorney general and consumer class action plaintiffs that were ultimately resolved in a consolidated U.S. District Court proceeding.
In 2015, Corinthian Colleges, a publicly traded operator of for-profit colleges, retained Borges and Greenberg Gross to represent it in litigation and investigations by state and federal authorities, including advising Corinthian up to the point of its chapter 11 filing. Also in 2015, John C. Hueston, the specially appointed chapter 11 trustee for consumer debt relief firm Morgan Drexen, retained Borges as outside litigation and bankruptcy counsel to conduct an expedited investigation into legality of operations, claims against insiders, and asset recoveries.
Borges’s many high-profile representations have included defending major law firms against fraudulent conveyance claims under the controversial Jewel v. Boxer doctrine, and successfully pursuing non-dischargeable fraud claims on behalf of a bank group against commercial borrowers on a $130 million lending facility. Most recently, Borges was retained by the heirs of the creator of Alvin and the Chipmunks to protect their intellectual property and financial rights in a Delaware bankruptcy filed by a major entertainment distribution company.
Borges started his career at Gibson, Dunn & Crutcher after graduating from Yale Law School and serving as a law clerk at the U.S. Court of Appeals for the First Circuit. He became immersed in bankruptcy litigation in 1992, when he was hired away from Gibson Dunn by the Bass Organization out of Fort Worth, Texas, to help resolve the largest and costliest savings and loan failure in U.S. history.
In addition to a national bankruptcy litigation practice, Borges maintains an active trial practice in state and federal courts throughout the country. His clients include public companies, private businesses, and individuals.
Three other Greenberg Gross partners were included on the latest Best Lawyers’ list of legal notables: Alan A. Greenberg for commercial litigation, Michael I. Katz for intellectual property litigation, and Wayne R. Gross for white collar criminal defense and regulatory enforcement litigation.
Best Lawyers® is the oldest peer-review publication in the legal profession. Attorneys are listed solely on the basis of peer nominations and confidential surveys of leading attorneys. Lawyers are not allowed to pay a fee to be listed. For the 2017 Edition of The Best Lawyers in America, 7.3 million votes were cast and analyzed.