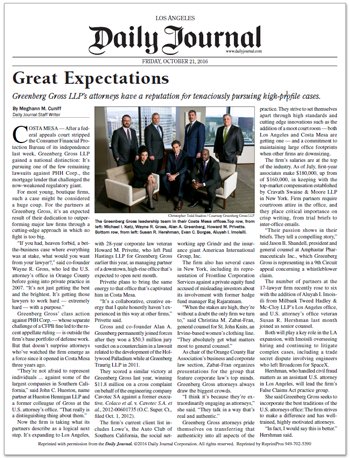 By Meghann M. Cuniff
COSTA MESA – After a federal appeals court stripped the Consumer Financial Protection Bureau of its independence last week, Greenberg Gross LLP gained a national distinction: it’s pursuing one of the only last-standing lawsuit against the mortgage lender that challenged the now-former regulatory giant.

For most young boutique firms, such a case might be considered a huge coup. For the partners at Greenberg Gross, it’s an expected result of their dedication to outperforming major law firms through a cutting-edge approach in which no fight is too big.

“If you had, heaven forbid, a bet-the-business case where everything was at stake, what would you want from your lawyer?,” said co-founder Wayne R. Gross, who led the U.S. Attorney’s Office in Orange County before going into private practice in 2007. “It’s not just getting the best and the brightest. It’s getting those lawyers to work hard – extremely hard – with a purpose.”

Greenberg Gross’s class action against the PHH Corp., which in a separate case challenged an CFPB fine, leading to the recent appellate ruling, is outside the firm’s base portfolio of defense work, but that doesn’t surprise attorneys who’ve watched the firm emerge as a reckoning force since it opened in Costa Mesa three years ago.

“They’re not afraid to represent individuals…against some of the largest companies in Southern California,” said John C. Hueston, name partner at Hueston Hennigan LLP and a former colleague of Gross at the U.S. Attorney’s Office. “That really is a distinguishing thing about them.”

Now the firm is taking what its partners describe as a logical next step: it’s expanding to Los Angeles, with 28-year corporate law veteran Howard M. Privette, who left Paul Hastings LLP for Greenberg Gross earlier this year, as managing partner of a downtown, high-rise office that’s expected to open next month.

Privette plans to bring the same energy to that office that’s captivated him in Costa Mesa.

“It’s a collaborative, creative energy that I quite honestly haven’t experienced in this way at other firms,” Privette said.

Gross and co-founder Alan A. Greenberg permanently joined forces after they won a $50.3 million jury verdict on a counterclaim in a lawsuit related to the development of the Hollywood Palladium while at Greenberg Traurig LLP in 2011. They scored a similar victory at Greenberg Gross last year, winning $11.8 million on a cross complaint on behalf of the engineering company Cavotec SA against a former executive. Colaco et al. v. Cavotec S.A. et al., 2012-00601735 (O.C. Super. Ct., filed Oct. 1, 2012).

“When the stakes are high, they’re without a doubt the only firm we turn to,” said Christina M. Zabat-Fran, general counsel for St. John Knits, an Irvine-based women’s clothing line. “They absolutely get what matters most to general counsel.”

Greenberg Gross attorneys pride themselves on transferring that authenticity into all aspects of the practice. They strive to set themselves apart through high standards and cutting edge innovations such as the addition of a moot court room – both Los Angeles and Costa Mesa are getting one – and a commitment to maintaining large office footprints when other firms are downsizing. Salaries are top in the industry: as of July, first-year associates make $180,000 instead of $160,000, in keeping with the top-market compensation established by Cravath Swaine & Moore LLP in New York. Firm partners require courtroom attire be worn in the office, and they place critical importance on crisp writing, from trial briefs to inter-office emails.

“Their passion shows in their briefs,” said Jason B. Shandell, president and general counsel at Amphastar Pharmaceuticals, Inc., which Greenberg Gross is representing in a 9th Circuit appeal concerning a whistleblower claim. “They tell a compelling story.”
The number of partners at the 17-lawyer firm recently rose to six with the addition of Aluyah I. Imoisili from Milbank Tweed Hadley & McCloy LLP, and U.S. Attorney’s Office veteran Susan R. Hershman last month joined as senior counsel.

Both will play a key role in the L.A. expansion, with Imoisili overseeing hiring and continuing to litigate complex cases, including a trade secret dispute between engineers who left Broadcom for SpaceX.

She said Greenberg Gross seeks to incorporate the best traditions of the U.S. Attorneys Office: the firm strives to make a difference and has well-trained, highly motivated attorneys.

“In fact, I would say this is better.” Hershman said.