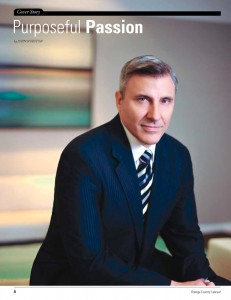 In anticipation of his upcoming installation as President of the OCBA, attorney Wayne Gross is the cover story in the January 2013 issue of OC Lawyer Magazine. Profile written by former Assistant U.S. Attorney and former OCBA President, John Hueston.
From the article:
“It was during my tenure at the U.S. Attorney’s Office that I met Wayne. We developed a close bond, helping each other in trial preparation and critiquing our respective performances. It was in that laboratory that we learned what is likely to sway a judge and jury, as well as when to push hard and when to back off. We debated trial approaches and created trial narratives designed to intrigue jurors and join us in fact-finding. We learned that it was not enough to win; we had to win fairly and with style.”
Read the full article (PDF)