A Song of Justice 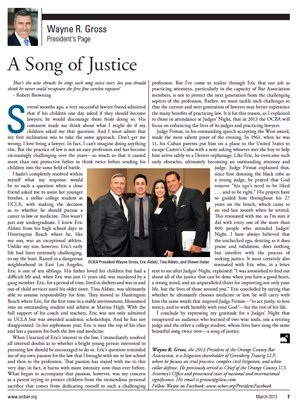 That’s the wise thrush; he sings each song twice over, lest you should think he never could recapture the first fine careless rapture!
~ Robert Browning

Several months ago, a very successful lawyer friend admitted that if his children one day asked if they should become lawyers, he would discourage them from doing so. His comment made me think about what I might do if my children asked me that question. And I must admit that my first inclination was to take the same approach. Don’t get me wrong; I love being a lawyer. In fact, I can’t imagine doing anything else. But the practice of law is not an easy profession and has become increasingly challenging over the years—so much so that it caused more than one protective father to think twice before sending his children into the same field of battle.

I hadn’t completely resolved within myself what my response would be to such a question when a close friend asked me to assist her younger brother, a stellar college student at UCLA, with making the decision as to whether he should pursue a career in law or medicine. This wasn’t just any undergraduate. I knew Eric Aldatz from his high school days in Huntington Beach where he, like my son, was an exceptional athlete. Unlike my son, however, Eric’s early life had been extremely challenging, to say the least. Raised in a dangerous neighborhood in East Los Angeles, Eric is one of ten siblings. His father loved his children but had a difficult life and, when Eric was just 11 years old, was murdered by a gang member. Eric, for a period of time, lived in shelters and was in and out of child services until his older sister, Tina Aldatz, was ultimately able to assume responsibility for him. They moved to Huntington Beach where Eric, for the first time in a stable environment, blossomed into an outstanding student and athlete at Marina High. With the full support of his coach and teachers, Eric was not only admitted to UCLA but was awarded academic scholarships. And he has not disappointed. In his sophomore year, Eric is near the top of his class and has a passion for both the law and medicine.

When I learned of Eric’s interest in the law, I immediately resolved all internal doubts as to whether a bright young person interested in pursuing law should be encouraged to do so. Eric’s question reminded me of my own passion for the law that I brought with me to law school and then to the profession. That passion has stayed with me to this very day; in fact, it burns with more intensity now than ever before. What began to accompany that passion, however, was my concern as a parent trying to protect children from the tremendous personal sacrifice that comes from dedicating oneself to such a challenging profession. But I’ve come to realize through Eric that our job as practicing attorneys, particularly in the capacity of Bar Association members, is not to protect the next generation from the challenging aspects of the profession. Rather, we must tackle such challenges so that the current and next generation of lawyers may better experience the many benefits of practicing law. It is for this reason, as I explained to those in attendance at Judges’ Night, that in 2013 the OCBA will focus on enhancing the lives of its judges and practicing lawyers.

Judge Firmat, in his outstanding speech accepting the West award, made the most salient point of the evening. In 1961, when he was 11, his Cuban parents put him on a plane to the United States to escape Castro’s Cuba with a note asking whoever met the boy to help him arrive safely to a Denver orphanage. Like Eric, he overcame such early obstacles, ultimately becoming an outstanding attorney and judge. Judge Firmat explained that, since first donning the black robe as a young judge, he prayed that God remove “his ego’s need to be liked . . . and to be right.” His prayers have so guided him throughout his 27 years on the bench, which came to an end last month when he retired. This resonated with me, as I’m sure it did with every one of the more than 800 people who attended Judges’ Night. I have always believed that the unchecked ego, desiring as it does praise and validation, does nothing but interfere with the process of seeking justice. It most certainly also resonated with Eric who, in a letter sent to me after Judges’ Night, explained: “I was astonished to find out about all of the justice that can be done when you have a good heart, a strong mind, and an unparalleled thirst for improving not only your life, but the lives of those around you.” Eric concluded by saying that whether he ultimately chooses medicine or law, he will carry with him the same words that inspired Judge Firmat—“to act justly, to love mercy, and to walk humbly with your God”—for the rest of his life.

I conclude by expressing my gratitude for a Judges’ Night that enraptured an audience who learned of two wise souls, one a retiring judge and the other a college student, whose lives have sung the same beautiful song twice over—a song of justice.