Making Justice a Reality for All

Request a Consultation
Posted on May 1, 2013 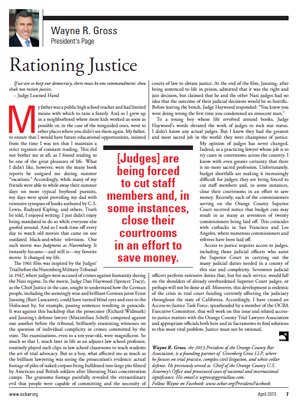 by Wayne R. Gross
A man may die, nations may rise and fall, but an idea lives on. ~ John F. Kennedy
Presiding Judge Thomas Borris, Assistant Presiding Judge Glenda Sanders, and I, among others from the Orange County Bar, recently met in Sacramento to lobby for more funding to the state judicial branch. Sounds odd, doesn’t it? Before preparing for the trip, I did not contemplate that one of my jobs as OCBA President would be to lobby the legislature. But it turns out that it might be the most important task of my tenure. Since the fiscal crisis of 2008, the California judicial branch has experienced cumulative reductions of $3.5 billion. This phenomenal number is difficult to grasp in the abstract. To understand what this really means requires an understanding of what courts have been forced to do in response to such cuts.
As an initial matter, Presiding Judge Borris and Assistant Presiding Judge Sanders have been masterful at managing this fiscal crisis for the Orange County Superior Courts. For example, Orange County is one of the first state court jurisdictions to have gone “paperless,” making the processing of cases far more cost-effective than in the vast majority of other state court jurisdictions. Unfortunately, such steps have delayed but not prevented the courts from having to make increasingly difficult decisions that ultimately undermine access to justice. Orange County residents involved in small claims cases (less than $10,000) may litigate such cases in various courts across the county. Residents who file such cases are often poor, cannot afford legal representation, and face a dispute that means a great deal to their lives. Until now, they have been able to travel to a courthouse nearest their residence, present their case to a judicial officer, often a commissioner, and receive their day in court. Due to the improper and unwarranted reductions to the judiciary’s budget by Sacramento, however, the Orange County Superior Court, in July 2013, will be forced to consolidate all small claims matters in one courthouse, the Newport Beach Harbor Court, to make the administration of such cases more cost-effective. This means that residents who live far from Newport Beach will have to find their way, often using public transportation, to the one remaining courthouse where such cases can be heard. Of course, this assumes there will be commissioners to hear such cases. As I mentioned in my previous President’s Page, these same budget cuts have placed the jobs of the vast majority of Orange County commissioners in jeopardy.
As bad as Orange County has it, other jurisdictions have it even worse. As reported by the Open Courts Coalition of California, the following events illustrate the severity of the problem:

These are only three of the countless examples of the decimating effect of court underfunding. Currently, the judicial branch budget represents only one percent of the General Fund—one penny out of each dollar. This is not enough. Indeed, the General Fund share of the judicial branch budget has fallen from fifty-six percent in fiscal year 2008-2009 to only twenty percent in 2012-2013. In a desperate attempt to secure funding from alternative sources, courts have increased fees charged to litigants, effectively creating by necessity a user-fee system that will disproportionately affect the indigent.
The Open Courts Coalition proposes an effective solution to the problem, which includes restoring $150 million that was reduced from the judicial branch budget in fiscal year 2011-12. Of course, this means that Sacramento must reverse course and treat the judicial branch as a co-equal branch of government that needs the appropriate amount of funding to provide access to justice to all California residents. The purpose of my recent trip to Sacramento was to convince Orange County-based legislators to advocate for such funding. The good news is that they understand the problem. The bad news is that they, by themselves, lack the power to do what’s needed. The governor, as well as numerous legislators, possess such power but, as of yet, have refused to take action. Accordingly, I will be seeking the support of bar presidents across the state to join the OCBA in conveying to Sacramento that action must be taken.
JFK’s administration fostered powerful principles that sought the assistance of the citizenry to tackle the challenges of the era. He believed that positive change first started with an idea. I share that belief and now seek your help. As members of one of the largest voluntary bars in the country, we have the power and the ability to bring about change. We must use that power to ensure that access to justice remains a reality for everyone, including the indigent and vulnerable most in need of our judicial system. To harness such power, I have asked the OCBA to create an email address, [email protected], that will enable you to share your suggestions and offers of assistance. Together, we can make sure that Sacramento does what it must do to make justice a reality for all.