One Year After the Yates Memorandum

Request a Consultation
Posted on December 10, 2016 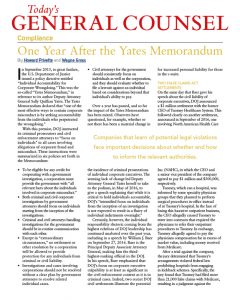 Download PDF
In September 2015, to great fanfare, the U.S. Department of Justice issued a policy directive entitled “Individual Accountability for Corporate Wrongdoing.” The so-called “Yates Memorandum,” in reference to its author Deputy Attorney General Sally Quillian Yates, declared that “one of the most effective ways to contain corporate misconduct is by seeking accountability from the individuals who perpetrated the wrongdoing.” With this premise, DOJ instructed its criminal prosecutors and civil enforcement attorneys to “focus on individuals” in all cases involving allegations of “corporate fraud and misconduct.”
These instructions were summarized in six policies set forth in the Yates Memorandum:

More than a year has now passed, and so far the impact of the Yates Memorandum has been mixed. Observers have questioned, for example, whether or not there has been a material change in the incidence of criminal prosecutions of individual corporate executives. The seeming lack of change led Deputy Attorney General Yates herself to take to the podium in May 2016 to give a speech explaining that while “it is critical to hold individuals accountable,” DOJ’s “intensified focus on individuals from the inception of an investigation is not expected to result in a flurry of individual indictments overnight.”

Certainly, the “individual responsibility” rhetoric coming from the highest echelons of DOJ leadership has continued unabated over the past year, including very recently in a speech by William J. Baer on September 27, 2016. Baer is the Principal Deputy Associate Attorney General, making him the third-highest-ranking official in the Department of Justice. In his speech, Baer emphasized that DOJ’s focus on corporate executives’ culpability is at least as significant in the civil enforcement context as it is in criminal cases. Indeed, two recent DOJ civil settlements illustrate the potential for increased personal liability on those in the c-suite.

The Tuomey and NAHC False Claims Act Settlements
On the same day that Baer gave his speech about civil liability of corporate executives, DOJ announced a $1 million settlement with the former CEO of Tuomey Healthcare System. This followed closely on another settlement announced on September 19, 2016 involving North American Health Care Inc. (NAHC), in which the CEO and a senior vice president of the company agreed to pay $1 million and $500,000, respectively.

Tuomey, which ran a hospital, was informed by some specialty physician groups that they planned to perform surgical procedures in-office instead of at Tuomey’s hospital. In the face of losing this lucrative outpatient business, the CEO allegedly caused Tuomey to enter into contracts that required the physicians to refer their outpatient procedures to Tuomey. In exchange, Tuomey allegedly agreed to pay the physicians compensation far in excess of market value, including money received from Medicare.

After a trial against the company, the jury determined that Tuomey’s arrangements violated federal law prohibiting hospitals from engaging in kickback schemes. Specifically, the jury found that Tuomey had filed more than 21,000 false claims with Medicare, resulting in a judgment against the company under the False Claims Act for $237.4 million. The DOJ later settled this judgment with the company for $72.4 million, but did not agree to forego proceeding against the CEO. This is consistent with the policies stated in the Yates Memorandum, which instructs DOJ attorneys that no settlement or resolution with a corporation will be allowed to provide protection for any individuals from criminal or civil liability, except in “extraordinary circumstances.”

Not surprisingly, DOJ then turned its attention to Tuomey’s CEO, who ultimately agreed to pay $1 million to settle the claims against him personally. The CEO also agreed to a prohibition from participating in federal health care programs for four years.

The NAHC case was based on allegations that the company’s CEO and senior vice president of reimbursement violated the False Claims Act by billing government health care programs for medically unnecessary rehabilitation therapy services. Not only did NAHC agree to pay $28.5 million, its CEO paid an additional $1 million, and its senior vice president paid $500,000. The settlement ominously excluded any other individuals from the release of liability. Moreover, the company and both individuals agreed to cooperate fully with the DOJ in its continuing investigation of individuals and entities not released by the settlement. This echoes another key aspect of the Yates Memorandum, which requires corporations to provide the government with “all relevant facts about the individuals involved in the corporate misconduct” in order to be eligible for “cooperation credit” when resolving a matter.

The Yates Effect on Internal Corporate Investigations
Although the Yates Memorandum may not have resulted – yet – in an appreciable increase in the number of actions taken by DOJ against corporate executives, behind the scenes the impact of the memorandum has been felt by corporations confronting the necessity of an internal investigation of alleged misconduct.
In this context, the first policy set forth in the Yates Memorandum is likely the most relevant to corporations and their counsel. Companies that learn of potential legal violations face important decisions about whether and how to alert and inform the relevant authorities. Even before the Yates Memorandum, existing policies of DOJ and the SEC, for example, would allow companies that self-report violations to receive “credit” for “cooperation” when decisions are later made about whether and how to bring charges or to seek penalties and damages for those violations.

Under the Yates Memorandum, however, a company will not receive any “credit” at all from DOJ unless it first “completely disclose(s) to the Department all relevant facts about individual misconduct.” This policy requires the company to “identify all individuals involved in or responsible for the misconduct at issue, regardless of their position, status or seniority, and provide to the Department all facts relating to that misconduct.” Indeed, Deputy Attorney General Yates was quite blunt about the new policy in a speech delivered the day after issuing her memorandum: “It’s all or nothing. No more picking and choosing what gets disclosed. No more partial credit for cooperation that doesn’t include information about individuals.”

In light of this policy, corporate counsel confronting the need to conduct an internal investigation or to respond to a government inquiry must be particularly cognizant of potential conflicts within the company. The first steps in an investigation often include interviewing key executives and employees who potentially possess relevant information. In the past, preliminary interviews might be conducted by in-house counsel, or the company’s regular outside counsel, to assess the scope of the issues and consider next steps. The Yates Memorandum’s instruction pertaining to “cooperation credit,” however, raises the potential for conflicts between the company’s counsel and the individuals being interviewed. It is critical for counsel to consider these conflicts from the very beginning of an investigation and, where appropriate, consider independent counsel both for the company and for individuals.

Indeed, recent guidance in DOJ speeches has served to bring lurking Constitutional concerns into even sharper focus. In her May 2016 speech, Deputy Attorney General Yates tried to allay concerns that the DOJ’s new policies will require expensive investigations into every potential issue, explaining that investigations should be “tailored to the scope of the wrongdoing.” She also said that a company will not be disqualified from receiving cooperation credit “simply because it didn’t have all the facts lined up on the first day it began talking with us.”

In this regard, in her May 2016 speech, Deputy Attorney General Yates declared that “we expect that cooperating companies will continue to turn over the information to the prosecutor as they receive it.” And, while the “determination of the appropriate scope and how to proceed is always case specific . . . if a company’s counsel has questions regarding scope, they should do what many defense lawyers do now – contact the prosecutor directly and talk about it.” Yates noted that “[a]lready, based on reports on the ground, firms are doing just that.”

Under the circumstances, corporate executives (and corporate counsel) should take no solace that a wave of prosecutions has not occurred in the year since the Yates Memorandum. The DOJ is actively following the directives set forth in the memorandum, and it is imperative that corporate executives and their counsel understand the potentially high-stakes ramifications of these directives in the day-to-day conduct of their business.