The C-Suite in the Crosshairs: Federal Prosecutors Are Primed to Target Corporate Executives

Request a Consultation
Posted on October 19, 2015 By Wayne R. Gross 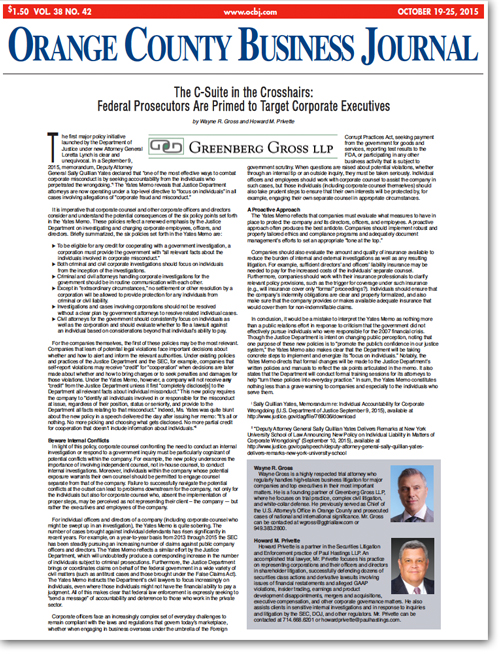 The first major policy initiative launched by the Department of Justice under new Attorney General Loretta Lynch is clear and unequivocal. In a September 9, 2015, memorandum, Deputy Attorney General Sally Quillian Yates declared that “one of the most effective ways to combat corporate misconduct is by seeking accountability from the individuals who perpetrated the wrongdoing.” The Yates Memo reveals that Justice Department attorneys are now operating under a top-level directive to “focus on individuals” in all cases involving allegations of “corporate fraud and misconduct.”
It is imperative that corporate counsel and other corporate officers and directors consider and understand the potential consequences of the six policy points set forth in the Yates Memo. These policies reflect a renewed emphasis by the Justice Department on investigating and charging corporate employees, officers, and directors. Briefly summarized, the six policies set forth in the Yates Memo are:

Civil attorneys for the government should consistently focus on individuals as well as the corporation and should evaluate whether to file a lawsuit against an individual based on considerations beyond that individual’s ability to pay.
For the companies themselves, the first of these policies may be the most relevant. Companies that learn of potential legal violations face important decisions about whether and how to alert and inform the relevant authorities. Under existing policies and practices of the Justice Department and the SEC, for example, companies that self-report violations may receive “credit” for “cooperation” when decisions are later made about whether and how to bring charges or to seek penalties and damages for those violations. Under the Yates Memo, however, a company will not receive any “credit” from the Justice Department unless it first “completely disclose[s] to the Department all relevant facts about individual misconduct.” This new policy requires the company to “identify all individuals involved in or responsible for the misconduct at issue, regardless of their position, status or seniority, and provide to the Department all facts relating to that misconduct.” Indeed, Ms. Yates was quite blunt about the new policy in a speech delivered the day after issuing her memo: “It’s all or nothing. No more picking and choosing what gets disclosed. No more partial credit for cooperation that doesn’t include information about individuals.”

In light of this policy, corporate counsel confronting the need to conduct an internal investigation or respond to a government inquiry must be particularly cognizant of potential conflicts within the company. For example, the new policy underscores the importance of involving independent counsel, not in-house counsel, to conduct internal investigations. Moreover, individuals within the company whose potential exposure warrants their own counsel should be permitted to engage counsel separate from that of the company. Failure to successfully navigate the potential conflicts at the outset can lead to problems downstream for the company, not only for the individuals but also for corporate counsel who, absent the implementation of proper steps, may be perceived as not representing their client – the company — but rather the executives and employees of the company.
For individual officers and directors of a company (including corporate counsel who might be swept up in an investigation), the Yates Memo is quite sobering. The number of cases brought against individual defendants has risen significantly in recent years. For example, on a year-to-year basis from 2013 through 2015 the SEC has been steadily pursuing an increasing number of claims against public company officers and directors. The Yates Memo reflects a similar effort by the Justice Department, which will undoubtedly produce a corresponding increase in the number of individuals subject to criminal prosecutions. Furthermore, the Justice Department brings or coordinates claims on behalf of the federal government in a wide variety of civil matters (such as antitrust cases and those brought under the False Claims Act). The Yates Memo instructs the Department’s civil lawyers to focus increasingly on individuals, even where those individuals might not have the financial ability to pay a judgment. All of this makes clear that federal law enforcement is expressly seeking to “send a message” of accountability and deterrence to those who work in the private sector.
Corporate officers face an increasingly complex set of everyday challenges to remain compliant with the laws and regulations that govern today’s marketplace, whether when engaging in business overseas under the umbrella of the Foreign Corrupt Practices Act, seeking payment from the government for goods and services, reporting test results to the FDA, or participating in any other business activity that is subject to government scrutiny. When questions are raised about potential violations, whether through an internal tip or an outside inquiry, they must be taken seriously. Individual officers and employees should work with corporate counsel to assist the company in such cases, but those individuals (including corporate counsel themselves) should also take prudent steps to ensure that their own interests will be protected by, for example, engaging their own separate counsel in appropriate circumstances.

The Yates Memo reflects that companies must evaluate what measures to have in place to protect the company and its directors, officers, and employees. A proactive approach often produces the best antidote. Companies should implement robust and properly tailored ethics and compliance programs and adequately document management’s efforts to set an appropriate “tone at the top.”
Companies should also evaluate the amount and quality of insurance available to reduce the burden of internal and external investigations as well as any resulting litigation. For example, sufficient directors’ and officers’ liability insurance may be needed to pay for the increased costs of the individuals’ separate counsel. Furthermore, companies should work with their insurance professionals to clarify relevant policy provisions, such as the trigger for coverage under such insurance (e.g., will insurance cover only “formal” proceedings?). Individuals should ensure that the company’s indemnity obligations are clear and properly formalized, and also make sure that the company provides or makes available adequate insurance that would cover them for non-indemnifiable claims.
In conclusion, it would be a mistake to interpret the Yates Memo as nothing more than a public relations effort in response to criticism that the government did not effectively pursue individuals who were responsible for the 2007 financial crisis. Though the Justice Department is intent on changing public perception, noting that one purpose of these new policies is to “promote the public’s confidence in our justice system,” the Yates Memo also makes clear that the Department will be taking concrete steps to implement and energize its “focus on individuals.” Notably, the Yates Memo directs that formal changes will be made to the Justice Department’s written policies and manuals to reflect the six points articulated in the memo. It also states that the Department will conduct formal training sessions for its attorneys to help “turn these policies into everyday practice.” In sum, the Yates Memo constitutes nothing less than a grave warning to companies and especially to the individuals who serve them.