Why We Wear Ties 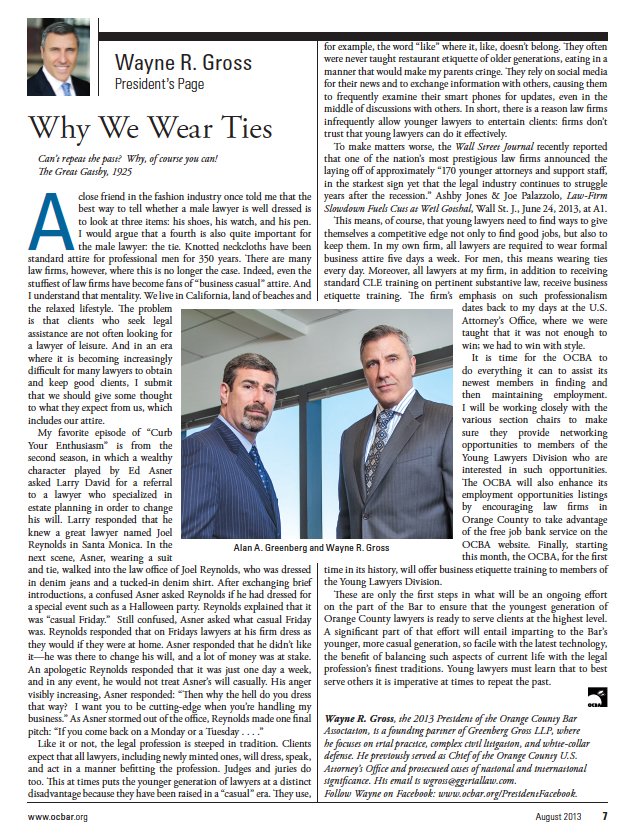 A close friend in the fashion industry once told me that the best way to tell whether a male lawyer is well dressed is to look at three items: his shoes, his watch, and his pen. I would argue that a fourth is also quite important for the male lawyer: the tie. Knotted neckcloths have been standard attire for professional men for 350 years. There are many law firms, however, where this is no longer the case. Indeed, even the stuffiest of law firms have become fans of “business casual” attire. And I understand that mentality. We live in California, land of beaches and the relaxed lifestyle. The problem is that clients who seek legal assistance are not often looking for a lawyer of leisure. And in an era where it is becoming increasingly difficult for many lawyers to obtain and keep good clients, I submit that we should give some thought to what they expect from us, which includes our attire.

My favorite episode of “Curb Your Enthusiasm” is from the second season, in which a wealthy character played by Ed Asner asked Larry David for a referral to a lawyer who specialized in estate planning in order to change his will. Larry responded that he knew a great lawyer named Joel Reynolds in Santa Monica. In the next scene, Asner, wearing a suit and tie, walked into the law office of Joel Reynolds, who was dressed in denim jeans and a tucked-in denim shirt. After exchanging brief introductions, a confused Asner asked Reynolds if he had dressed for a special event such as a Halloween party. Reynolds explained that it was “casual Friday.”  Still confused, Asner asked what casual Friday was. Reynolds responded that on Fridays lawyers at his firm dress as they would if they were at home. Asner responded that he didn’t like it—he was there to change his will, and a lot of money was at stake. An apologetic Reynolds responded that it was just one day a week, and in any event, he would not treat Asner’s will casually. His anger visibly increasing, Asner responded: “Then why the hell do you dress that way?  I want you to be cutting-edge when you’re handling my business.” As Asner stormed out of the office, Reynolds made one final pitch: “If you come back on a Monday or a Tuesday . . . .”

Like it or not, the legal profession is steeped in tradition. Clients expect that all lawyers, including newly minted ones, will dress, speak, and act in a manner befitting the profession. Judges and juries do too. This at times puts the younger generation of lawyers at a distinct disadvantage because they have been raised in a “casual” era. They use, for example, the word “like” where it, like, doesn’t belong. They often were never taught restaurant etiquette of older generations, eating in a manner that would make my parents cringe. They rely on social media for their news and to exchange information with others, causing them to frequently examine their smart phones for updates, even in the middle of discussions with others. In short, there is a reason law firms infrequently allow younger lawyers to entertain clients: firms don’t trust that young lawyers can do it effectively.

To make matters worse, the Wall Street Journal recently reported that one of the nation’s most prestigious law firms announced the laying off of approximately “170 younger attorneys and support staff, in the starkest sign yet that the legal industry continues to struggle years after the recession.” Ashby Jones & Joe Palazzolo, Law-Firm Slowdown Fuels Cuts at Weil Gotshal, Wall St. J., June 24, 2013, at A1.

This means, of course, that young lawyers need to find ways to give themselves a competitive edge not only to find good jobs, but also to keep them. In my own firm, all lawyers are required to wear formal business attire five days a week. For men, this means wearing ties every day. Moreover, all lawyers at my firm, in addition to receiving standard CLE training on pertinent substantive law, receive business etiquette training. The firm’s emphasis on such professionalism dates back to my days at the U.S. Attorney’s Office, where we were taught that it was not enough to win; we had to win with style.

It is time for the OCBA to do everything it can to assist its newest members in finding and then maintaining employment. I will be working closely with the various section chairs to make sure they provide networking opportunities to members of the Young Lawyers Division who are interested in such opportunities. The OCBA will also enhance its employment opportunities listings by encouraging law firms in Orange County to take advantage of the free job bank service on the OCBA website. Finally, starting this month, the OCBA, for the first time in its history, will offer business etiquette training to members of the Young Lawyers Division.

These are only the first steps in what will be an ongoing effort on the part of the Bar to ensure that the youngest generation of Orange County lawyers is ready to serve clients at the highest level. A significant part of that effort will entail imparting to the Bar’s younger, more casual generation, so facile with the latest technology, the benefit of balancing such aspects of current life with the legal profession’s finest traditions. Young lawyers must learn that to best serve others it is imperative at times to repeat the past.